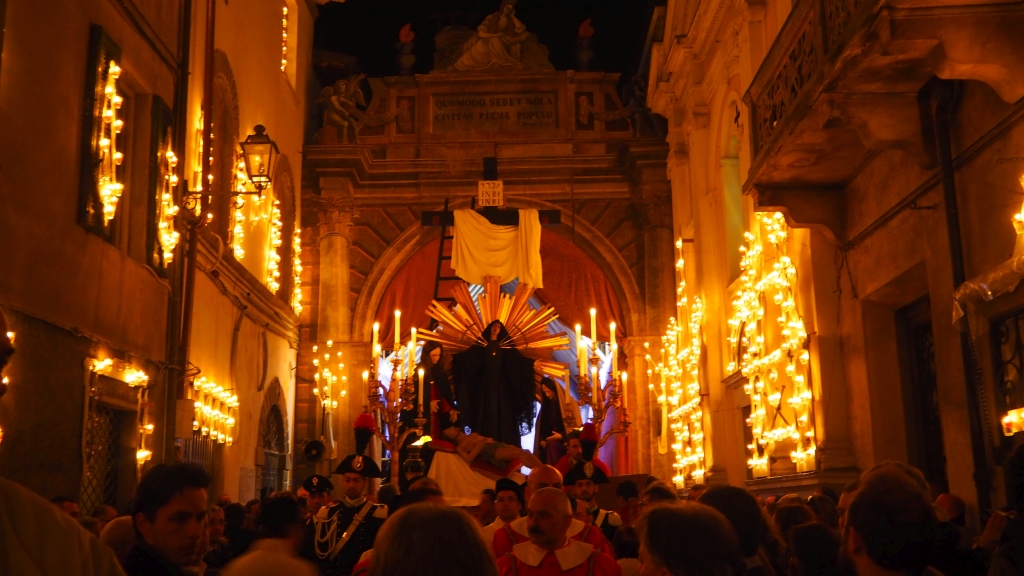 Every three years on Good Friday, starting from Madonna Dei Dolori’s church it continuous through the streets of Camaiore the solemn procession of the triennial of Dead Christ that has as focal element, representation of the deposition of Christ the Redeemer, in the year 2016 will be 340 years that the statue of Christ is carried in procession and in 2019 will resort 150 years of scenic representation made by Gabrielli’s teacher in the year 1869. The scenery that is the background to the event is perhaps unique in Italy for their beauty and suggestive ability, thousands of candles from the facades of the houses are able to create an atmosphere almost unreal that brings the minds of people back in time. This sacred, ancient celebration has its origins from a particular procession of penance, that even today it’s called “Del Crocione” which already in ‘500, the brotherhood of SS. Trinity, founded at the church of Dolori in the late fifteenth century, held in the late afternoon of Good Friday.
Towards the middle of XVII century, as can be read from the Book of the Council 1st April 1676, it came the first procession of Jesus Died, it is said that they only bore the Christ and direct participation of the Magnificent Council councillors (at the time director of the organ castle of Camaiore), in representation of the administration, as decided by an assembly’s vote. Since that time it has never lacked neither the presence nor the aid of the administration, that have alternated themselves.  In 1691, the “Confraternita della SS Trinità”bought the statue of The Madonna Addolorata, which after being venerated in the Chiesa Collegiata was finally transferred with a solemn procession to the church of San Vincenzo Confessore, today Chiesa dei Dolori. The tradition of illuminating the passage of the sacred simulacrum began the 16th April 1710 as can be detected from the books of the Community Councils. “...for the evening of the next Good Friday, which it must carry the statue of Jesus died, for glimpses of torches...”
For almost three centuries, the authorities and the people, without ever coming to fulfil its commitment taken by our fathers and giving demonstration of great faith, they held in life this particular tradition, it became a source of pride and prestige for the whole city that definitely feels own.
The years in which it came back this solemnity, in Camaiore’s families, several days ahead we begin to take out from the lumber rooms and from the cellars multiform wooden frames, armours, from the most varied shapes, which will be useful to sustain the glasses for the illumination, which by over three hundred years is realised strictly in oil with the exclusive wick named “CINCINDELLORO”. Joiners and painters will ensure the restoration and will dye them in white. The body of the small light is made from Cincindelloro “a frame made of metal wire, kept afloat by small corks, it supports the cotton wool that will remain suspended above the level of the oil to be turned on the first twilight.
The real preparatory work starts just on the saint Monday, when a group of workers with long ladders, shall place the armor along the facades of the houses of the streets  and of the main squares of the historical centre of Camaiore, which gradually are acquiring an unusual appearance.
Not less important what is happening  in the countryside and surrounding hills, which as a natural huge amphitheatre of the village,  it contain all around the residential area, even here a lot of people compete the most beautiful Calvario, that in the darkness of the night it will stand out radiant and shiny on the gloomy sky’s background.
Triennal of Jesus died, to remember the people who participated, there will be still the memory of the intense emotional moment obtained by, the participation at the preys, the accurate reading of the spirituality expressed in the sorrow and piety of the Deposition Group and the taste to appreciate the traditional “luminara”organised by the whole Camaiore’s citizenship.