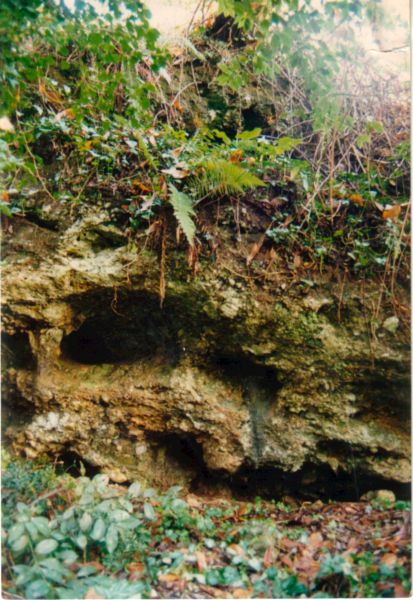 This site can be found along the left side of "Rio dei Colli", just below "Metato" and very close to the ruins of Montecastrese Castle (Lombrici). It is formed by several small natural caves that are on different levels in an outcrop of limestone conglomerate and with a maximum width of about 70 cm and to a depth of 1 m. They have been explored for the first time by Nello Puccioni in 1914 on behalf of the Committee for the Research of Human Paleontology in Italy.

Inside these cavities they were found human remains belonging to 7 different people: 6 adults and 1 teenager. Among the few turned up artifacts there are: funeral burial decorations, including a fragment of raw clay from a vase with a vertical loop, and on top a low cylindrical button and other ceramic fragments among which there is a cone-shaped cover.

It is particular interesting one of the skulls here found, because it presents a hole of 3,8 cm probably due to a traumatic injury, unless it is the outcome of a successful surgery: in fact, the man must have survived the operation (picture on the right).

Therapeutic cranial drilling has begun in the Near East during the Neolithic period and it is also documented in Italy. Other similar cases of cranial drilling are documented in Tuscany in the site of Grotta del Leone of Agnano (Pisa), dating back to the Enolithic period and in the site of Grotta dello Scoglietti (Grosseto), dating back to the Bronze Age.