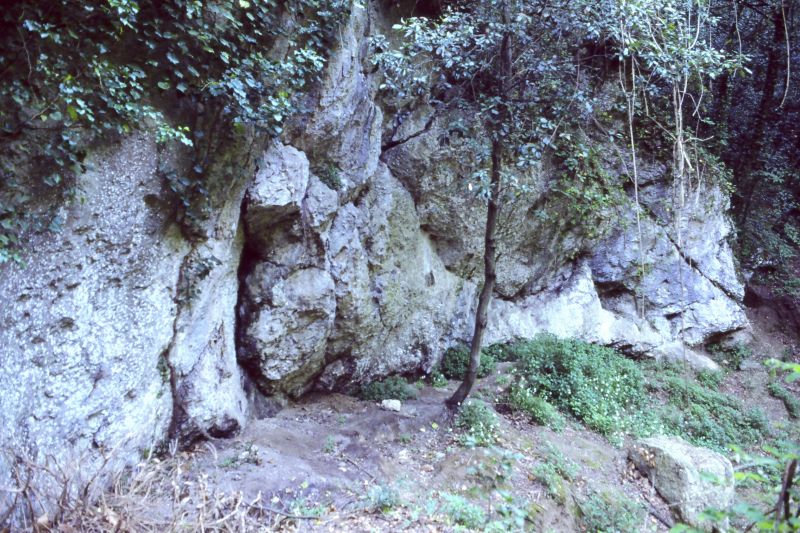 On the slopes of Mount Penna, along the left bank of the Lombricese Stream, there are some "shelters under rock" at the base of the cliffs of Candalla that were exploited during the phase of climatic improvement which characterized the Holocene, especially during the Bronze Age (picture on the right). The term "shelter under rock" indicates a natural protrusion of the rock, useful to provide a shelter from the weather: these rocky walls could guarantee a suitable protection and they constituted a comfortable support for the huts of the local communities, which had stable villages nearby, but they began to frequent the river bed to stay there seasonally and to conduct pastoral activities. At the peak of Mount Penna other little natural caves were used during that period to bury the dead.

Candalla shelters were excavated by the Alberto Carlo Blanc Museum of Viareggio in 1984 - 1985 and the excavations have returned the most consistent traces of human attendance during the Bronze Age.

Situated at 35 mt above the riverbed of Lombricese Stream at the slopes of a high sheer wall, it is formed by a recess in the rock and it has a width of 11 mt and a height. Archeological excavations have highlighted layers of soil with remains of a cobblestone built to make the living area flat and several fragments of vases (whose forms and decorations document the cultural phase of the Early Middle Bronze Age), bone awls and other tools for daily activities have been recovered.

A bury of a Young girl of about 11 - 12 years was put in a natural rock ravine, with ceramic vases as funeral equipment. The study of tooth enamel alterations has revealed a state of malnutrition between the first and the third year of life.

Analysis of the remains taken from the fireside areas have also revealed that the forest consisted of a mixed oak grove with black hornbeam and oak and it revealed also that there were consumed various wild fruits and abundant charred acorns. Consumption of acorns, due to the diffusion of the pastoral economy and pig breeding, was probably also part of human's diet. Charred fragments of small wild apples (some of them split in half) and fruits of plu tree and wild dogwood have been found there. Starting from the Neolithic, wild dogwood spread abundantly due to the gradual forest thinning caused by pastoralism and agriculture.

The lack of cereals is maybe due to the main incidence of the use of local forestry resources, so we should think about a frequentation of the area only at particular moments of the year, maybe at the end of the summer, when the area could provide sufficient spontaneous food resources, thanks to the abundant presence of the fruits of the forest. Fireside's coals of this settlement also let us get the dating of about 3600 years from today (3600+- 60 B.P).

Situated 30 meters high above the riverbed of Lombricese Stream, it documents an older one utilization during the Copper Age (or Eneolithic), a cultural phase during which clay vases were decorated with scraps of clay in the shape of "scales", engraved streaks or with different types of impressions. Stone millstones were also used for food preparation. 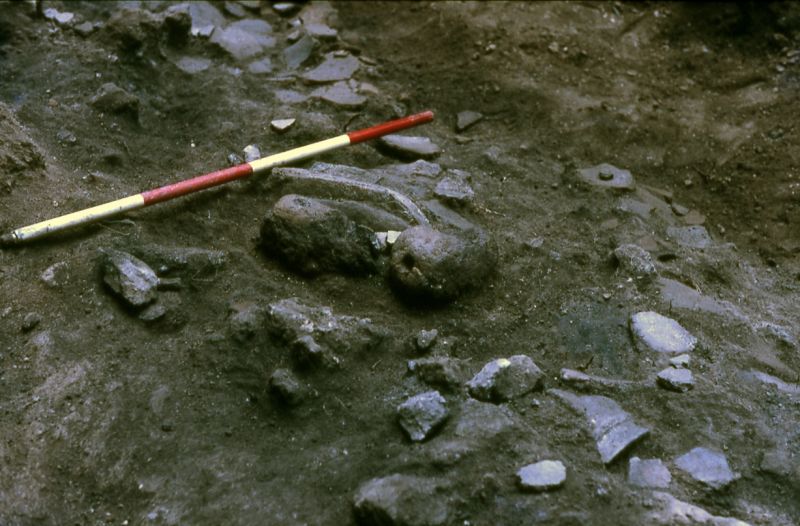 During Bronze Age the settlement was more settled and it was realised a hut, that was leaning against the rock walls and it came with a clay floor and "incannicciato" walls, that is, walls made with a wooden frame covered in clay. Inside there was the a fireside surrounded by stones.  Spindles for the spinning of wool, a hoe in deer horn and a copper block prove the execution of longer-term permanent activities. Several clay fragments report the most characteristic form of this cultural phase, that is the bowl with raised handle with wrapped ends. During the Final Bronze Age clay was characterised by horizontal lines decorations, oblique ribbing and "coppelle", that is, little conical hollows on the surface of the vase. An element of an amber necklace dates back to Final Bronze Age, too: its value should be remarkable, due to the fact that the supply areas for this raw material were the Baltic Sea and the North Sea. The bead has the particular "Tirinto shape" (the name derives from the beads found in Greece in the Tirinto treasure, who dates back to Mycenaean times) proves that the shepherds populations of this area had business contacts already well developed: in fact, this  questo precious material and this bead shape are present in various graves or "ripostigli" (closets) of the Italian peninsula (they are especially widespread in Northern Italy) that date back to Final Bronze Age. Amber has probably come to Candalla from Frattesina, a place near Fratta Polesine (Rovigo), that was and important craft and commercial center of that age and that it was also a sorting and processing point raw materials both locals and imported, among which there was amber from Baltic regions.

It is situated 7 meters high above the riverbed of Lombricese Steam. This shelter suffered over time various ingressions by the waters of the stream, which have left traces in the stratigraphy of the deposit with different clay layers, who are a proof of diversi stagnant water on the sides of the real stream.

During the Bronze Age, when the stream level settled, the "shelter under rock" was frequented from people who put their housing facilities on it: remains of clay hardened by fire and a pole hole prove the presence of a hut close to the rocky wall, like in the Ambra Shelter.

Big vases were used there, and they were decorated with application of clay cordons; big bowls with solid handles were used too. They both were typical shapes of the Central Bronze Age. The presence of terracotta spindle proves an usual filature activity. This shelter was also rarely frequented during High Middle Age and in recent age. in fact, a solid coal layer proves the construction of a charcoal, which testifies an exploitation of these natural ledges of the rock in  the recent past, too. 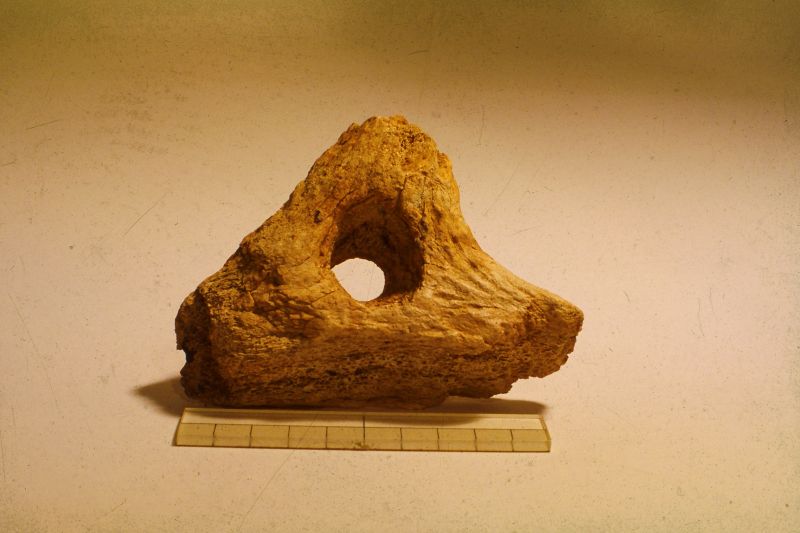 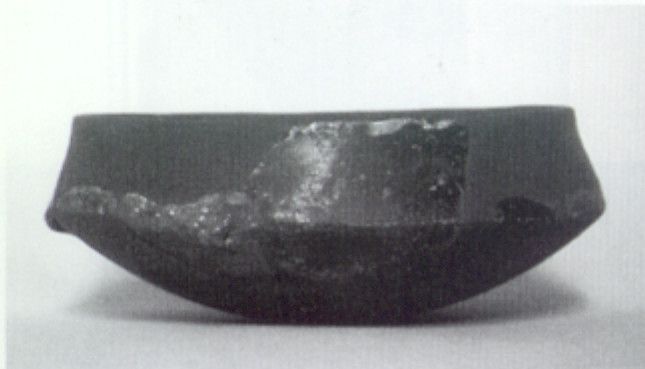 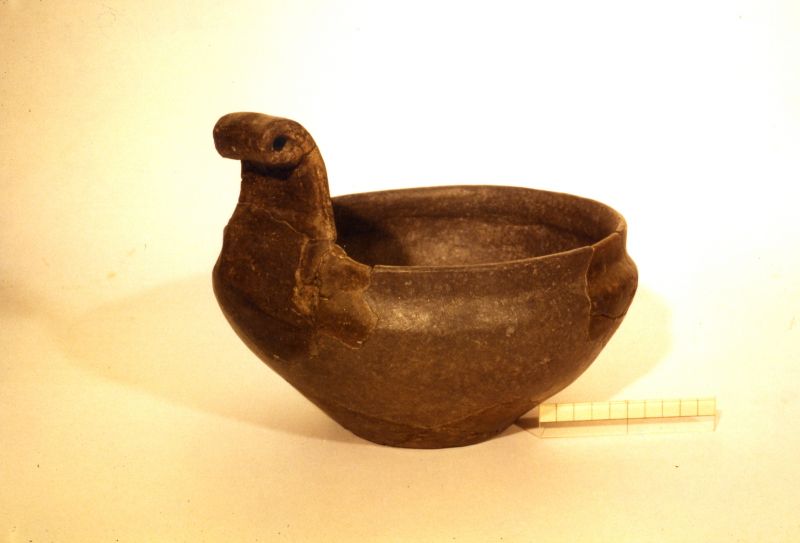