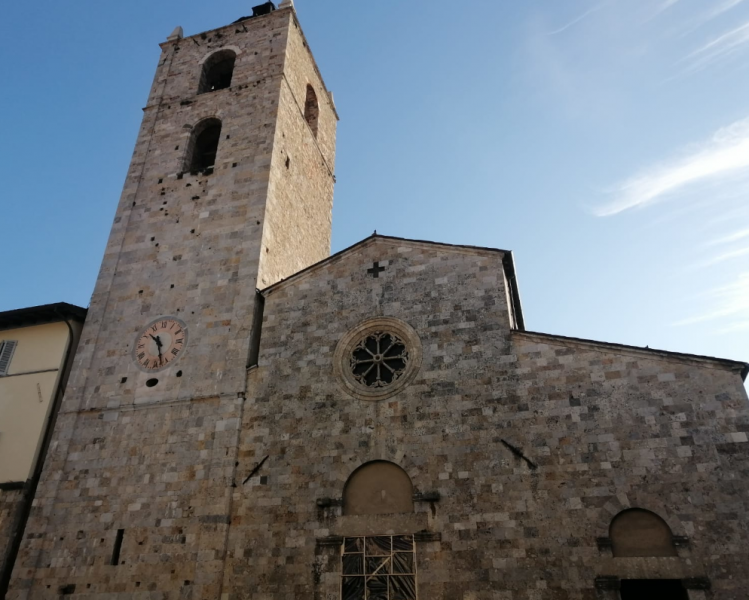 The Collegiate Church (Collegiata) of Santa Maria Assunta is the parish church of Camaiore and is located right in the historic centre of the city. It was founded in 1278, but is already mentioned in a valuation dated 1260 with the name of Ecclesia Sanctae Mariae de Burgo Campi Majoris. Another characteristic of this church is its devotion to the Nome di Gesù (Name of Jesus) which was started by San Bernardino in 1424 and then officialized by the Holy See in 1683 (even though it had been celebrated on June 1st since 1528). In 1387, around 30 years after the construction of the bell tower - completed in 1356 - the Church of Santa Maria Assunta was given the possibility of celebrating baptism. The then pope Urbano VI Prignano conferred the church this privilege with a seal dated January 4th 1387 and at the same time deprived the Pieve of its control on the parish. Later on, the church was bestowed with the titles of Collegiate Church (Collegiata) and Insigne, respectively in 1515 and 1796.

The architect who first built the church is unknown, they were probably maestri comacini or maestri campionesi (constructors from the North of Italy, often gathered in corporations) that worked in Lucca and Versilia between the eleventh and the fourteenth century. Without a shred of doubt the structure of the abbey of San Pietro (Badia) was taken into account for the construction of the new church, even if the church of Santa Maria Assunta was almost 6 metres shorter. The facade is provided with two doors: the bigger one in the middle and the minor one on the right. An architrave on grooved capitals, a lunette and an archivolt top both the entrances. Above the central door a rose window and a greek cross embellish the facade. One more door permits entering the church, that is the “porta dei Fondesi”. The “porta dei Catacumeni” opening onto via Vittorio Emanuele is now out of use. On the outside of the church three epigraphs provide information about the history of the building. The oldest one reveals the year of foundation, which is 1278. An identical epigraph is exposed at the Archeological Museum of Camaiore and was taken off from the wall of a house in via Oberdan. Over the centuries the church of Santa Maria Assunta underwent restorations and reconstructions. In 1448 the building was widened and reached 36 metres length: in 1458 the Romanesque facade was completed. At the end of the eighteenth century the Collegiata was adapted to the rococo style under the supervision of the architect Tommaso Pezzini and the facade was heightened by 2 metres. Afterwards, the church was consecrated by the Archbishop of Lucca Filippo Sardi on October 23rd 1799. In the following centuries the building was shaken by two earthquakes: the one in 1846, the other in 1914. In 1915 the Collegiata underwent a restoration to get back its original Romanesque aspect. In particular, that was obtained by removing the Baroque elements on the facade and on the wall of the church opening onto via Vittorio Emanuele. An epigraph was placed to celebrate the work.

Between the fifteenth and the nineteenth century the inside of the building was largely modified. Today it is composed of a nave and two aisles which are divided by Romanesque pillars with arches. The nave is covered with a barrel vault, while the aisles with rib vaults. The altars date back to the seventeenth and eighteenth centuries, except for the main altar by Vincenzo Santini from Pietrasanta (nineteenth century). In the period of the Second Vatican Council the two baptismal fonts dated 1387 were located at the main entrance of the church, where they still are. They were commissioned by prior Bono and were blessed via a seal by the Bishop of Lucca Giovanni III Saluzzi on April 2nd 1387. One of the two baptismal fonts is octagonal, while the other has a sarcophagus-like form. The first one is embellished with reliefs on six out of eight facets: the Good Shepherd, Adam and Eve, the dragon with the pome, the angel holding a chandelier and a mask, to conclude. The other font has a relief representing a baptism on the frontal side and over it an inscription: “Venite filii audite me timore Domini docebo vos”. On both the sides of the relief the Guinigi coat of arms and the emblem of Camaiore complete the scene. Another inscription confirms the dating of the artwork: 1387. A pipe organ is right above the main portal. It is a fifteenth century instrument, which was restored in the eighteenth century by Benedetto and Luigi Tronci from Pistoia and restored again in the following century. On the left aisle it is worth mentioning the thirteenth-century wooden crucifix on the first altar and the canvas Comunione degli Apostoli (Communion of the Apostles) by Pier Dandini, Florentine painter who lived between the seventeenth and the eighteenth century. This latter artwork is located inside the chapel dedicated to the Santissimo Sacramento at the end of the aisle. In the chapel of the opposite aisle, which is dedicated to the Virgin, another canvas can be admired: it is the Annunciazione (Annunciation) by Stefano Tofanelli, dated 1805. In the same aisle, a statue of the Madonna by Vincenzo Santini is protected by an urn. It substitutes the splendid Vergine Annunciata (Virgin Annunciate) by the school of Matteo Civitali (fifteenth century), now at the Museum of Sacred Art of Camaiore together with many other artworks which once belonged to the Collegiata. To conclude, in the apse noteworthy are four canvas by the sixteenth-century painter Benedetto Brandimante from Lucca: Assunzione della Vergine, Santi Pietro e Paolo e Incoronazione della Vergine. (respectively Assumption of Mary into Heaven, Saints Peter and Paul and Coronation of the Virgin).