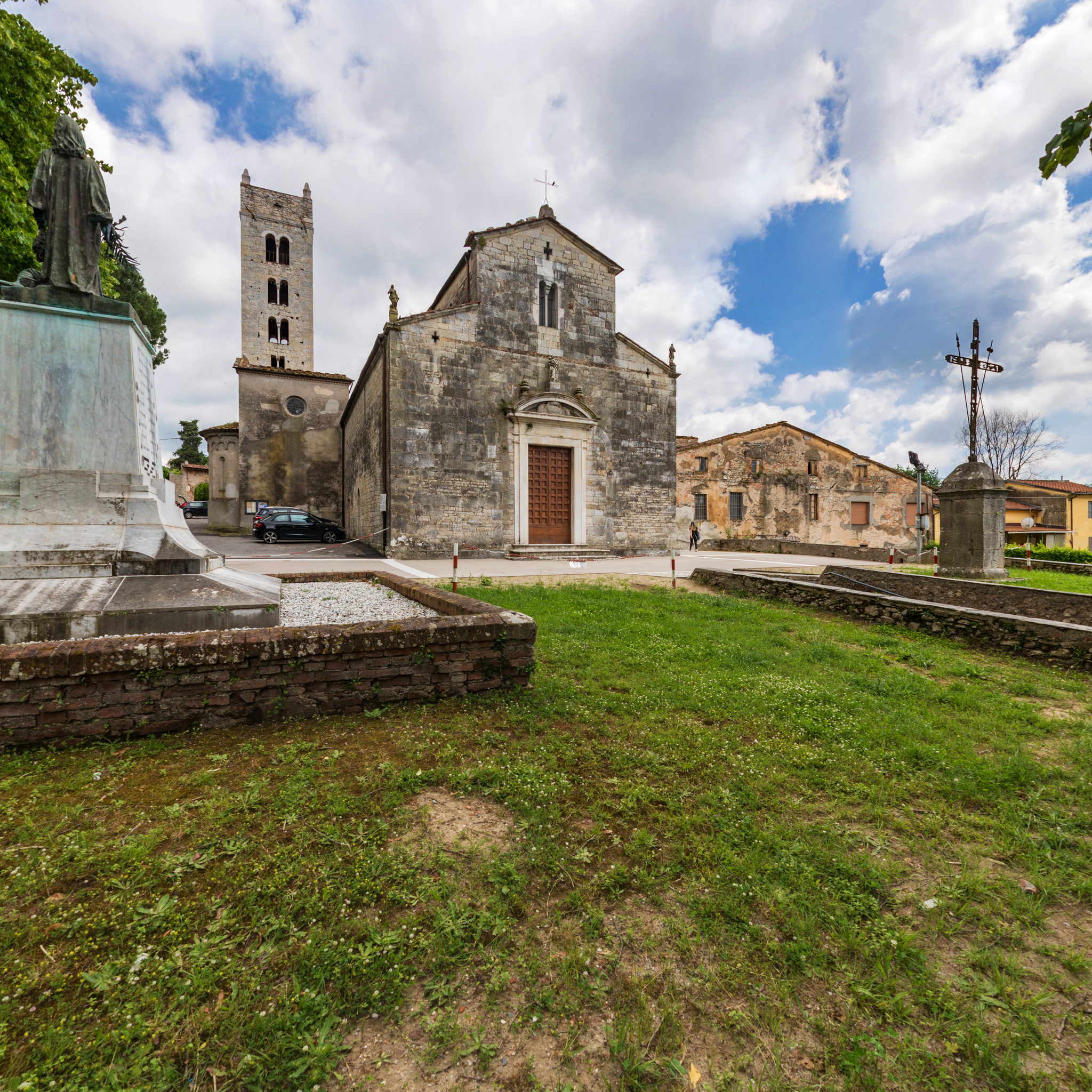 The Pieve (a rural church with a baptistery) of Camaiore is located on a slight hill to the right of the ancient via Francigena. It is a Romanesque church, one of the five pievi of the ancient Versilia and the main church of the whole territory of Camaiore. Its jurisdiction included the entire zone extending from the church of San Pantaleone in Elici to that of Santa Felicita in Valdicastello. Originally it was consecrated only to St. Stephen, but in the ninth century the name of St. John the Baptist was added, as it happened for all the pievi. At the same time it acquired the privilege of having the baptismal font and the cemetery. Since 934 it is dedicated also to St. Mary. Once the Pieve was the point of reference for all the churches and oratories which had been built in Camaiore since Lombard times. The Pieve was the only church to have parish rights, the only one that could celebrate baptism and hold funerals and that could collect tithes. The remaining churches were “ecclesiae subiectae” (subordinate churches).

The Pieve is first mentioned in a document dated 817 via which bishop Jacopo transferred some possession of the “Ecclesie S. Stefani in loco Campo Maiore” (Church of Santo Stefano in Camaiore) to a certain Gastaldulo. Judging from its property, though, the church is likely to be existing at least since the end of the eighth century. By tradition, the church is said to have been built in the sixth century and it would be one of the twenty-eight pievi erected by will of San Frediano, the then bishop of Lucca. But this hypothesis lacks reliability. The title of pieve (“plebs”) was first associated to the church of Santo Stefano in 820. The Piviere of Camaiore (i.e. all the churches depending on the Pieve) included the present villages of: Casoli, Metato, Lombrici, Vado (Gello), Camaiore, Nocchi, Gombitelli, Torcigliano, Montemagno, Pontemazzori, Marignana, Bargecchia (and Conca), Corsanico, Mommio e Pedona. The pievi could boast not only religious privileges, but also economic ones. Landowners and the king himself donated much of their real estate to the pievi in order to get into Heaven and, thus, the pievi enriched more and more. As a result of the foundation of the Church of Santa Maria Assunta in Camaiore in 1255, the Pieve was partially deprived of its hegemony, even though according to the valuation of 1260 in that year it still had a considerable estate. Anyway, the prestige of the Pieve was bound to decline, especially since 1387 when the Church of Santa Maria Assunta was given the possibility to celebrate baptism. Lastly, the Council of Trento (1545-1568) officially marked the end of the pievi in favour of parishes.

The building has a Latin-cross plan and its façade is oriented to the west, while its apse to the east. The salient façade is composed of square stones and completed by a sixteenth-century gate, a statue of the Virgin, a bifora and a Greek cross. On the wall traces of the ancient door can be spotted, specifically part of the round arch and a thirteenth-century capital. Moreover, observing the counter-façade it can be deduced that the ancient gate consisted of two arches and a column in the middle. On the outside near the apse is located the square bell tower which is divided into four levels of biforas and monoforas and is provided with four pinnacles on the top. The Pieve of Santo Stefano underwent many architectural interventions from the twelfth till the nineteenth century, when it was provided with the mosaic floor and the Latin-cross form. Lastly, in 1938 the original aspect of the church was partially restored: the façade was largely modified, the plaster on the internal walls was removed and the external buildings which placed against the church were torn down. Inside, the church is composed of two aisles and a nave which are divided by square pillars and round arches with monoforas. The walls are made of stones, while the ceiling of wooden trusses. The mosaic floor consists of coloured marble geometric patterns. The chancel with parapet and altar is four steps higher than the church floor. On the apse there are three monoforas. The two lateral chapels with small apses were built during the Baroque period and clash with the simplicity of the rest of the building.

Right after the entrance on the right we can immediately notice the “Baptismal font”: a Roman sarcophagus of marble. According to Bianco Bianchi (1464-1541), doctor, philosopher and chronicler from Camaiore, it comes from Lombrici and it was brought to Pieve in order to use it as a baptismal font. All the people born in the valley till 1387 were christened in it. Originally the sarcophagus is said to have contained the ashes of Lucio Imbricio, a civis romanus (Roman citizen), after whom the village of Lombrici was possibly named. Even if it is quite uncertain whether this person really existed, what is out of doubt is that the sarcophagus was meant for an eminent figure. On the frontal side it is embellished with friezes and low-relief sculptures. In the middle, inside a tondo, is located the half-length portrait of the dead whose face was not sculpted. This tondo is held by two Genii; at their feet lie two masks representing life according to Roman symbology. Next to them, on both side, there are two putti (cupids), flower baskets, some grapes, olive branches and animals. On the lateral sides of the sarcophagus scenes of rural life, such as grape and fruit harvest, are sculptured with a lower relief. The artwork is dated to the third century A.D. and was made by an unknown local artist. The back side of the sarcophagus is not visible since it is placed against the wall. To the left of the main Altar we can admire a fourteenth-century triptych by Battista from Pisa, entitled “Madonna in trono con Bambino e Santi” (Madonna and Child with Saints), which was commissioned by prior Nuto. Noteworthy are the sixteenth-century Crucifix and the fourteenth-century tabernacle containing the consecrated oil and located to the right of the apse. 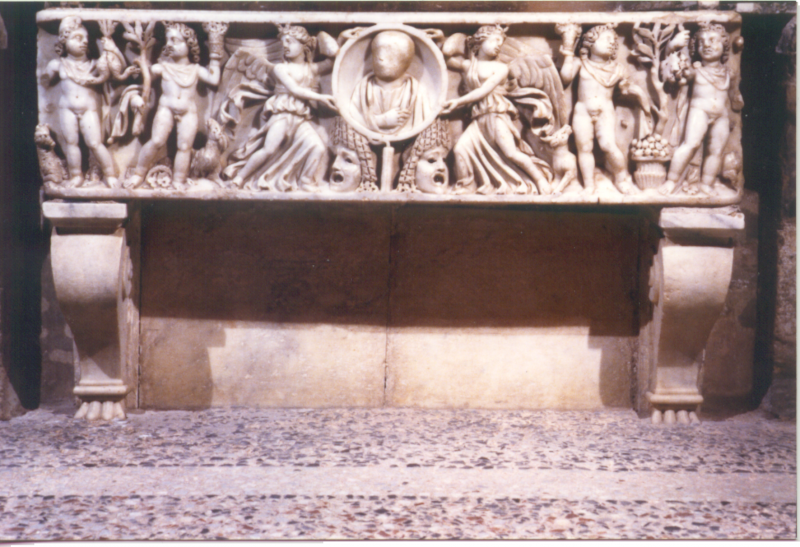