The church of San Pietro (or Badia) in Camaiore was once part of a big Benedectine monastery, which was founded along the Via Francigena. The first document referring to the church dates back to 761. It is an act which proclaims the election of Alamund as abbot of the monastery. Over time this monastery enjoyed great popularity thanks to its position. The Via Francigena was one of the most important roads in Italy, as it linked Rome to Canterbury (England) and was travelled by tradesmen coming from all over Europe. In particular, the church of San Pietro was located between Lucca and Luni, which were both wealthy cities and episcopal sees. Considerable donations, made between the eleventh and the twelfth century, largely contributed to the rise of the Badia and, meanwhile, the authority of the abbot became stronger. On April 28th 1180 Pope Alexander III with a seal took the monastery under his own protection and endowed it with some privileges. Since then, it was officially allowed to conduct funeral services, to collect tithes and to elect the priests that had to officiate in the churches and chapels under the jurisdiction of the Badia. Among them, there were San Michele in Camaiore, San Biagio in Lombrici and San Frediano in Pedona. Moreover, the abbot was given the honour of wearing both the mitre and the croiser, symbols of the episcopal power and he was bestowed with civil authority. For instance, he participated in some local decisions, like the election of the lords of nearby castles. Obviously, both the neighbouring monasteries and the Bishop of Lucca feared this increasing power and it was not rare for disputes to arise for the collection of tithes.

In 1217 a new religious order appeared in Camaiore: they were the Florians, a monastic order founded by Gioacchino da Fiore at the end of the twelfth century. According to a parchment, conserved in the Museum of Sacred Art in Camaiore, they were present in the area until 1388. This lapse of time was characterised by great prolificness for the Badia. In the same period the original church - which was probably the size of San Michele - was expanded, with the addition of two aisles, the apse and the lower part of the facade. The portal is still provided with its original lunette, while the door jambs have been substituted. The monastery was also supplied with defensive walls, of which at the present time just the portal is preserved. On the top of the portal there are still today the statues of St. Peter and St. Paul and an epigraph with the probable date of foundation of the walls and the symbol of the Florians. The cloister and the rest of the monastery stood north, while the cemetery was located south (as it is even today). In the refectory, the only remaining part of the monastery, there were probably some frescoes, as is evidenced by traces of two figures on the back wall. The interior of the church was likely to be frescoed, too. At the present time two frescoes still exist: the one depicting St. Mary of Egypt on the first pillar and the other representing the Madonna della Pietà on the second pillar. They are located immediately at the entrance of the church and were probably realised by the school of Giotto in the fourteenth century. In all likelihood the rest of the church was covered in frescoes, too, but they were lost due to a fire in May 1329, caused by the troops of Marco Visconti, then lord of Lucca. From the fourteenth to the sixteenth century the monastery passed under the control of different orders and commendatory abbots until 1527. In that year Pope Clement VII abolished the monastery and the abbot authority, donating all the goods to the Ospedale di San Luca in Lucca.

fourteenth-century volute capital found in the cemetery of the Badia, Archeological Museum of Camaiore

Between 1856 and 1859 the architect Giuseppe Pardini carried out a massive restoration. He restored the wall perimeter, opened some monoforas in the aisles and closed some sixteenth-century windows. For some centuries the complex suffered from carelessness, until 1902, when the bell tower and the tympanum were totally rebuilt. Moreover, a bifora was inserted on the facade. The church still preserves some interesting works of art, including the tabernacle and a fifteenth-century stoup. Many more artworks, once belonging to the Badia, can be admired now at the Museum of Sacred Art in Camaiore, while a fourteenth-century volute capital, found in the cemetery of the Badia, is exposed at the Archeological Museum in Camaiore. 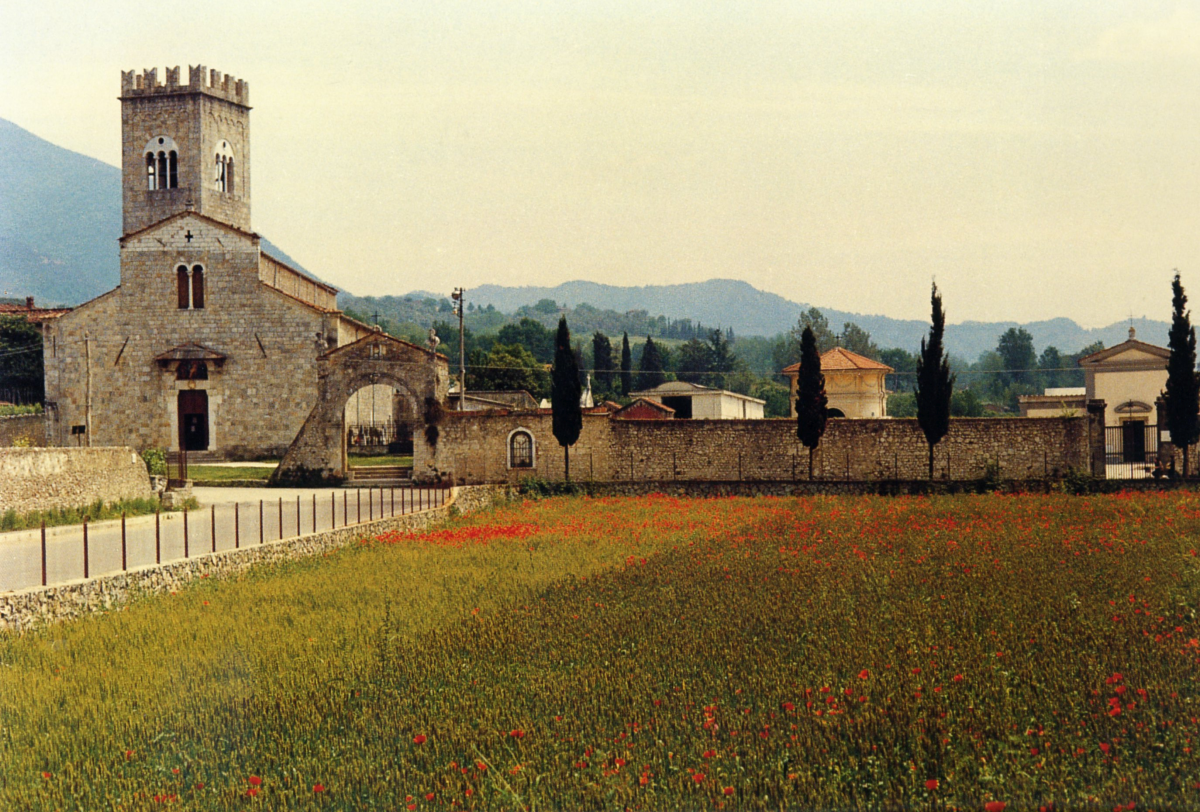