The Via Francigena or Via Romea is a route that links Rome, the centre of Christianity, to northern European countries and it is composed of stretches of earlier Roman streets, joined together for political and military reasons between the sixth and the seventh century AD.

In the sixth century, the Byzantines occupied Italy in order to spread their hegemony on the peninsula, but in 568 they were stopped by the arrival of the Langobards. They founded their capital in Pavia, but acquired some possessions in the south of Italy, too. To reach them without clashing with their enemies, the Langobards had to find an internal route: crossing the present Cisa Pass between the Ligurian and the Tuscanian Appenins, they arrived at Luni harbour and hence they got to the south. This itinerary started to be called “Mons Langobardorum” and in the Middle Ages it changed its name into “Via di Monte Bardone”.

The Langobards did not physically build this street, rather they reused and fortified some stretches of preexisting Roman roads. In order to make this route safer, they erected or reinforced strongholds and founded abbeys that functioned as hospitals and fortresses. Since when the Franks allied to the Pope in the ninth century, the “Via di Monte Bardone” started to be used to link Italy to France and, for this reason, was renamed “Via Francigena”. After the year 1000, the route acquired more importance thanks to the increase of pilgrimages towards Christian holy places, including Rome. Therefore, the “Via Francigena” started to be called “Via Romea” as well.

The Via Francigena is not properly composed of a single route, rather of different roads that reconnect in some points. Yet, an itinerary is officially acknowledged by the European Community and that is the one documented by Archbishop Sigeric from Canterbury in the tenth century. 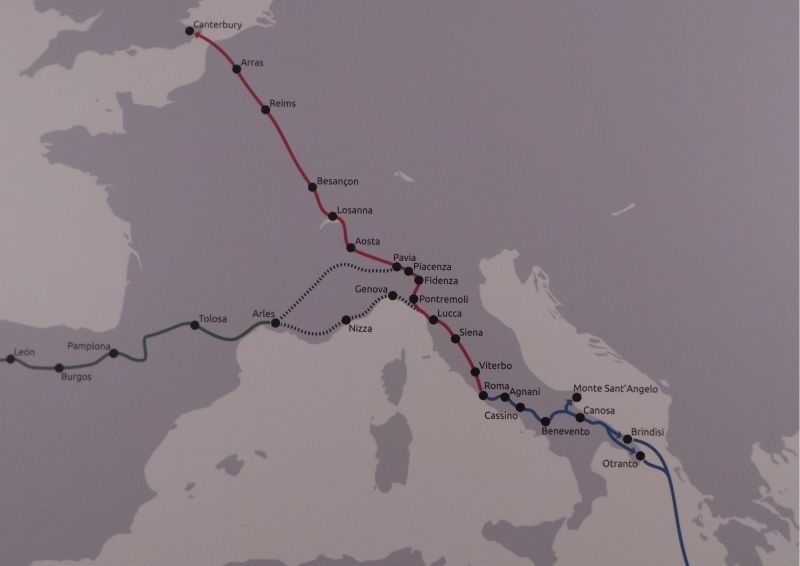 Some pelgrim route: in Red the Via Francigena, in Blue the route to Jerusalem, in Green the way to Santiago de Compostela

In 990 Sigeric, newly elected Archbishop of Canterbury, headed to Rome in order to receive the pallium – the archiepiscopal mantle – and the blessing from the Pope. On his way back home, he kept a travel diary whose contents we know thanks to a manuscript which is preserved at the British Museum in London. The document contains the names of the 79 stages (or submansiones) that Sigeric went through in order to get from Rome to the English Channel.

The first part of the itinerary stretched from Rome to Lake Bolsena (province of Viterbo, Lazio) through the ancient Via Cassia, then the journey headed towards Tuscany where the Archbishop noted several cities including S. Quirico d’Orcia, Siena, S. Gimignano, Lucca and Luni. Afterwards, the Cisa Pass – the then Montebardone pass – was crossed and the pilgrim arrived at Borgo San Donnino, present-day Fidenza (province of Parma, Emilia-Romagna). From the Po Valley the route reconnected with the Roman Via Emilia and on the other side of the Po it headed north across the Alps through the Great St Bernard Pass. In the last section of the journey, Sigeric went through France till the Atlantic Coast. Nowadays, the Via Francigena route is approximately the same except for slight changes due to political, economic, topographical and climatic reasons.

The Via Francigena led not only to Rome, but also to other holy places. Heading from Rome to the region of Apulia pilgrims could reach the Sanctuary of Monte Sant’Angelo sul Gargano and from Brindisi harbour they could sail towards Jerusalem. On the other hand, travelling by boat from Luni harbour (Tuscany), it was possible to get to Languedoc region in France and hence to walk towards Santiago de Compostela in the Spanish region of Galicia.

THE VIA FRANCIGENA IN CAMAIORE 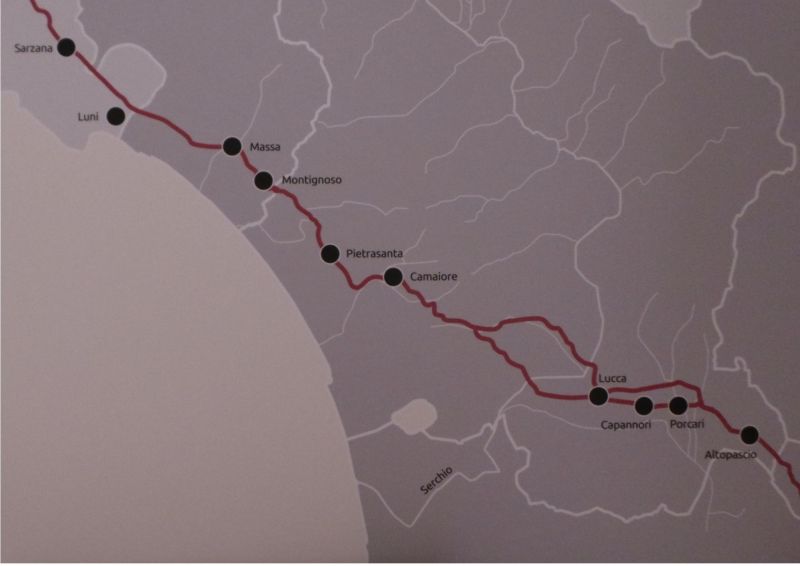 Among the 79 stages documented in Sigeric’s travel diary appears the toponym Campmaior – the old name for Camaiore – that corresponds to the 27th stage (submansio) on the Via Francigena route, between the two important cities of Lucca (26th stage) and Luni (28th stage). No further information are provided about Sigeric’s stop in Camaiore, even if we may assume that he was hosted in the abbey of San Pietro in Camaiore (Badia), first attested in 761 AD.

The Camaiore stage is cited for the first time in Sigeric’s itinerary, but it probably existed before the tenth century. In fact, even though the first housing unit in Camaiore is documented in 984, the toponym Campomaiore is already mentioned in 761 AD. 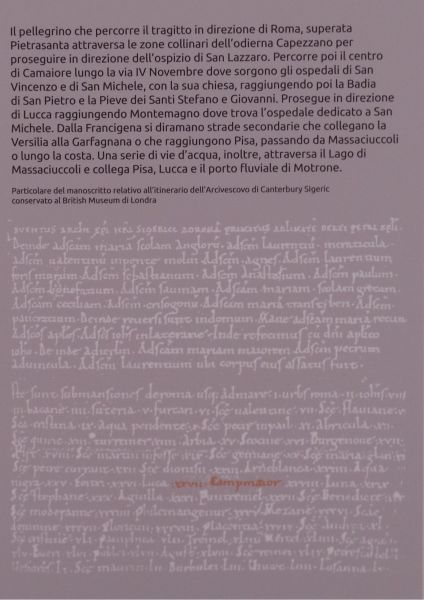 Camaiore and the Versilia were part of Medieval pilgrimage routes and that was decisive for culture. Just to give an example, the façade of the ancient Pieve of Camaiore was provided with a double door, a characteristic common to all the main churches on the Via Francigena.

Till the thirteenth century, the pilgrims heading to Rome or other holy places noted various Versilia cities on their travel diaries. Another pilgrimage route that passed through the Versilia was the one leading to Santiago de Compostela. As already mentioned, the pilgrims from Luni harbour reached the French region of Languedoc and then continued their journey on foot towards the Spanish region of Galicia. Thanks to them, the Versilia kept being an important stage for pilgrims, also when an alternative route to get to Rome – excluding the Versilia – became popular from the mid-thirteenth century.

The route from Valpromaro led to Montemagno whose church – dedicated to San Michele – and hospital are respectively mentioned in 1091 and in 1129 for the first time. After Montemagno, pilgrims could choose between two alternative paths: the one passing through the hamlet of Nocchi (Noccle) and the one crossing Pontemazzori. Hence, the itinerary headed to the centre of Camaiore and then to Via della Stretta – walking alongside the ancient Roman farm of the Acquarella – and led to the city of Pietrasanta.

Between the eight and the thirteenth century, this section of the Via Francigena was enriched with hospitals and churches. Among the hospitals, the oldest is the one dedicated to San Vincenzo that was erected thanks to two donations dated 27th February 1086. They were offered by Raimondo and Ildebrando and their wives Sarasina and Ada that at the same time provided the hospital with some goods. Moreover, a church was built near the hospital: it is first mentioned in a parchment dated 1180 and was demolished at the beginning of the twentieth century in order to enlarge the hospital itself.