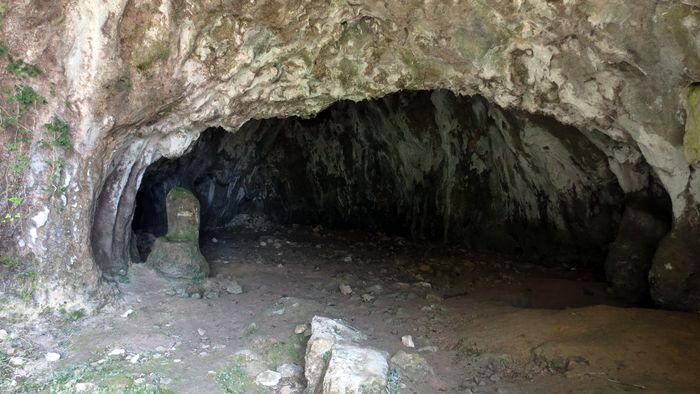 It is placed at 800 meters of altitude, 14 meters above the town of Casoli on the eastern side of the limestone cliff that surrounds the summit of Monte Gegoli. It has a wide entrance, as you can see in the picture on the left.

It was excaved for the first time by Regnoli in 1867, who identified in a tunnel the coals, artifacts, shells and human bones behind a large calcareous block formed by a stalagmitic concretion with the shape of a seat. Regnoli attributed 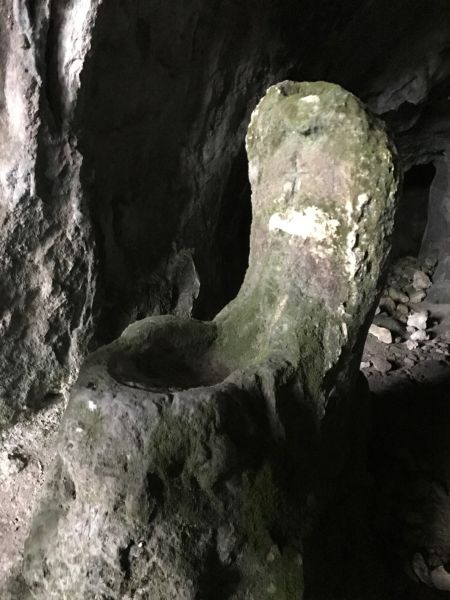 to the block sacral functions for funeral cerimonies (picture on the right).

In 1914 Puccioni ascertained that the only the tunnel on the left (2.20 meters deep, already been signaled by Regnoli), could proof the human attendance of the cave. Several artifacts emerged from the excavation: 10 fragments of a coarse and semi-dense vase, some flint blades, a core, an element of a sickle and 4 arrowheads, other numerous clay pellets of uncertain meaning and a stone pendant with a hole.

Among the animal species were identified deer, roe deer, goat and pig bones. Also several human bones belonging to, at least, four individuals, including 2 children, came to light. The finds were dated to the Eneolithic period (Copper Age, 3800 - 2200 a.C.).

According to the artifacts found, Grotta del Tanaccio seems to be one of the many natural caves used as a collective burial during the Eneolithic period in North - West Tuscany. In fact, during that period the funeral rite consisted of burial of the dead within karst crevasses and caves, with the objects such as copper daggers, polished stone axes, arrowheads and steatite, Marble, sandstone, bone and seashell ornament elements.

Archaeological materials belong to the collections of Pisa University and they are not currently exposed (picture on the left).