The town of Camaiore is situated in the centre of Versilia and forms a microcosm of contrasting but, at the same time, harmonic colours, where the greenish hills, framed by the Apuan Alps, are lapped by the clear water of the Tyrrhenian Sea.
Its history had already started in the pre-historic era, as the archaeological sites in Candalla and Grotta all’ Onda show. 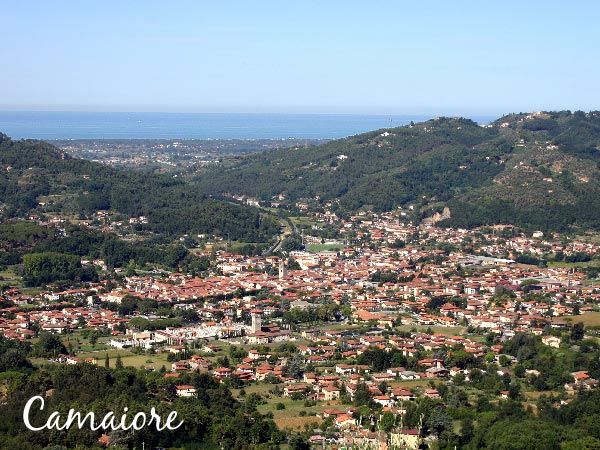 Then the Apuan-ligurians came here, and then the Romans. In the Middle Age Camaiore was an important halt along the Via Francigena , where passers-by could find shelter and refreshment inside the Benedectine Monastery of Paul and Peter, a wonderful example of Romanic architecture. The town still shows some parts of the Walls from the ruins of the Medieval Castle, and its urban map, divided in a symmetrical way and marked by certain streets and districts.
San Bernardino square represents the core of the town, as well as the town hall and the collegiate, the most important church among all the smaller others in the territory.
As you get out from the centre of Camaiore, continuing towards Lucca, you can see Pieve village, which, in the High Middle Age, represented the territorial and juridical organisation. We then can see all of the other hilly villages, which spread out until the border with the city of Lucca.
Going from Camaiore towards Viareggio, we can find the first flat village, Capezzano Pianore, which represents the agricultural part of the municipal area with its many small horticultural and floricultural companies, and then Lido di Camaiore.
Lido di Camaiore is one of the most important tourism centres in Versilia, and, starting from the 60s, it became one of the most famous beach resorts in the Tyrrhenian coast. The “Bellavista Vittoria” pier, which sticks out onto the sea, is the symbol of vivacity in Lido di Camaiore, recommended to all the tourists and visitors of Versilia.
The territory - 84,50 kmq - offers a variety of opportunities for tourists: in fact, within a few minutes by car, from the coast of Lido di Camaiore (which is counted as sea level) , you can easily reach the greenish contryside, the hills and the Apuan Alps, like the 225 meters high Montemagno, the 400 Casoli and the 500 Gombitelli.
This land is full of different flavours, traditions and rituals which characterise the culture and the way of being of its people, who are lively, kind, cosy and hospitable.
We can find some examples of these rituals in the traditional events which take place during the year: “E’ la via dell’orto” (a feast dedicated to vegetable gardens, seeds and herbs) during the first days of April, “Tappeti di segatura colorata” (created in honour of the Corpous Domini), “Follie d’altri tempi” (an exhibition of antiques, vintage vehicles and spare parts), scheduled during the week of the August Bank Holiday (August 15th), “Festa Pic” ( specialised in delicatessen, culture and chilli pepper ), during the first days of October, in collaboration with the Italian Chilli Pepper  Academy. Last but not least, we have the solemn procession “Gesù Morto” in honour of Jesus’ death, which takes place on Easter Friday once every three years , thanks to the atmosphere created by the huge amount of oil lamps that shine along all of the streets of the historical centre.

Camaiore has always been very famous in Versilia for its typical dishes: “frantoiana” soup, pepper-spiced pie, chocolate cake, “scarpaccia”, and many other specialities which are highly suggested to those who love eating and drinking in all kind of places, from posh restaurants to simple tarvens. In Lido di Camaiore you can also taste a huge variety of sea food dishes, thanks to its closeness to the sea.